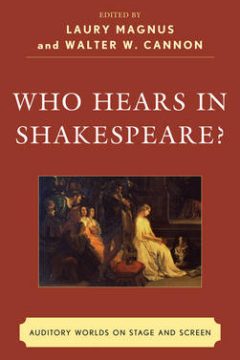 You are viewing: Who Hears in Shakespeare?

Who Hears in Shakespeare?

This volume, examining the ways in which Shakespeare’s plays are designed for hearers as well as spectators, has been prompted by recent explorations of the auditory dimension of early modern drama by such scholars as Andrew Gurr, Bruce Smith, and James Hirsh. To look at the dynamics of hearing in Shakespeare’s plays involves a paradigm shift that changes how we understand virtually everything about them, from the architecture of the buildings, to playing spaces, to blocking, and to larger interpretative issues, including our understanding of character based on players’ responses to what they hear, mishear, or refuse to hear. Who Hears in Shakespeare? Auditory Worlds on Stage and Screen is comprised of three sections on Shakespeare’s texts and performance history: “The Poetics of Hearing and the Early Modern Stage”; “Metahearing: Hearing, Knowing, and Audiences, Onstage and Off”; and “Transhearing: Hearing, Whispering, Overhearing, and Eavesdropping in Film and Other Media.” Chapters by noted scholars explore the complex reactions and interactions of onstage and offstage audiences and show how Shakespearean stagecraft, actualized on stage and adapted on screen, revolves around various situations and conventions of hearing-soliloquies,, asides, avesdropping, overhearing, and stage whispers. In short, Who Hears in Shakespeare? enunciates Shakespeare’s nuanced, powerful stagecraft of hearing. The volume ends with Stephen Booth’s afterword, his inspiring meditation on hearing that considers Shakespearean “audiences” and their responses to what they hear-or don’t hear-in Shakespeare’s plays. show more