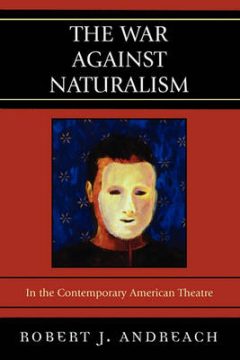 You are viewing: The War Against Naturalism

The War Against Naturalism

The book applies playwright John Guare’s statement that, “the war against naturalism,” is the history of the American theatre in the Twentieth-Century to selected plays by important contemporary American playwrights. Crucial to the argument is the recognition that a war presupposes two sides with neither side defeating the other, for if naturalistic theatre were to win, all theatre would be linear with characters circumscribed by their heredity and environment. If non-naturalistic theatre were to win, all theatre would be a hodgepodge of incoherent images. After isolating elements of a naturalistic play in its philosophical and mode of production sense, the book examines plays that wage war in language and character. The plays are all of the past few decades: some by Foreman and Wellman are disorienting; some by Albee, Groff, and Maxwell are controversial; others by Eno and Corthron are by playwrights on the verge of major careers; still others by Overmyer and Jenkin are drawing aspiring playwrights to them as models of new, exciting writing for the theatre. All of them, whether colliding genres and styles or destabilizing meaning as in plays by Gibson and Long or reclaiming a mystery as in plays by Ludlam, Greenberg, and Donagy, challenge naturalism’s boundaries. The book not only provides an approach to the contemporary American drama-theatre, but also brings together playwrights not perceived as having any connections other than the fact that they are creating plays today. The text is appropriate for undergraduate students through professors and practitioners. show more