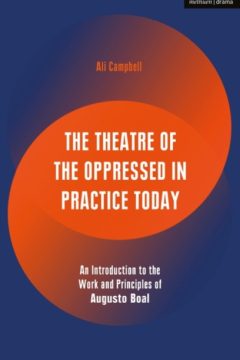 You are viewing: The Theatre of the Oppressed in Practice Today

The Theatre of the Oppressed in Practice Today

How has the work and legacy of Augusto Boal’s Theatre of the Oppressed been interpreted and practised around the world? What does it look like in practice in different contexts? This book provides an accessible introduction to the political and artistic principles Boal’s techniques are founded upon and traces their legacy today through examples of exemplary practice from around the globe. Authored by one of the key exponents of the Theatre of the Oppressed working today who was mentored by Boal, the volume equips readers with a clear grounding in the universal, transferable principles of Boal’s work, extrapolated from best practice across the field. Augusto Boal (1931-2009) was one of the most influential theatre directors of the 20th and early 21st centuries with his work and seminal manifesto for a Theatre of the Oppressed having a lasting impact on performance studies and the fields of education and community development. Using detailed contemporary case histories Ali Campbell demonstrates how the underlying principles of Boal’s practice have been adapted in the work of some of the most influential applied performance groups operating internationally today. These highly accessible studies extrapolate Boal’s core principles as they are enacted in the practices of an urban network (Theatre of the Oppressed NYC); a rural and developmental theatre organisation (Jana Sanskriti, West Bengal); Boal’s original company CTO Rio (Brazil) and a theatre-based group led by Learning-Disabled adults in the UK (The Lawnmowers Independent Theatre Company). The book concludes with an envisioning of possible futures for the Theatre of the Oppressed movement in the shifting political, educational and artistic context of the new century, with the principles in practice as a guide.show more