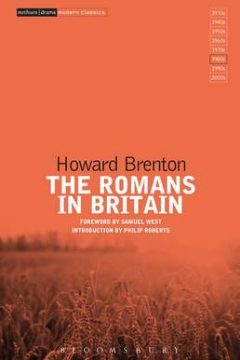 You are viewing: The Romans in Britain

The Romans in Britain

First staged at London’s National Theatre in 1980, having been commissioned by Peter Hall, The Romans in Britain contrasts Julius Caesar’s Roman invasion of Celtic Britain with the Saxon invasion of Romano-Celtic Britain, and finally Britain’s involvement in Northern Ireland during The Troubles of the late twentieth century. As these scenes bleed into one another, Brenton suggests what it might have been like for these people to meet. Three Roman soldiers sexually assault a young druid priest. A lone, wounded Saxon soldier stumbles into a field, a nightmare made real. An army intelligence officer begins to lose his mind in the Irish fields. Brenton’s sinewy vernaculars summon a lost history of cultural collision and oppression, of fear and sorrow. This edition features an introduction by Philip Roberts, Emeritus Professor of Drama & Theatre Studies at the University of Leeds, and a foreword by director Sam West.show more