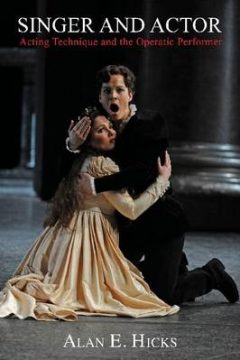 You are viewing: Singer and Actor

Current market forces in the performing arts, such as aging audiences, electronic media, and HD broadcasts, have changed the operatic landscape. Young opera singers entering the workforce find themselves navigating difficult and highly competitive waters. Previously ignored skill sets become assets – and, in many cases, requirements – in casting. But most singers graduate from college having never taken a formal acting class and knowing little about acting technique as it pertains to their craft. Singer and Actor demystifies theatrical acting technique stemming from Stanislavsky’s Method of Physical Action and provides singers at all levels a roadmap with which to complete character preparation, using a clear and organized progression based on the work of Franchelle S. Dorn and exercises and examples (recitatives, arias, and ensembles). Singers (including choristers) are given the necessary tools to prepare auditions and inhabit a character from rehearsal to final performance. Singer and Actor also provides a history of acting from its beginnings to the present day, including a survey of acting techniques from Stanislavsky, Meisner, Hagen, Strasberg, Larry Moss, and others. Drawing additionally on the writings of composers and other creators of opera, the book deals with the misconception that only the singing matters in opera and includes a discussion of previous approaches to operatic acting. show more