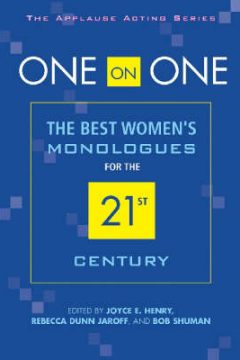 You are viewing: One on One

Three editors, each associated with theatre, collaborated on this book of monologues for actresses. What they discovered, besides bravura pieces for auditions, acting classes, and study, was the pulse of the millennial theatrical scene. A follow-up to the popular previous edition from the 1990s, One on One: The Best Women’s Monologues for the 21st Century includes the work of over 70 playwrights, spotlighting the best of Broadway, Off-Broadway, regional, and experimental writings since 2000. A special introduction also explains how to choose, practice, and perform a speech for auditions. Comic or serious – or both – the monologues are written for young, old, and multicultural players by famous names and up-and-coming talent. Anna Deavere Smith records abuse in “real” relationships (House Arrest); August Wilson relates trials of those who survived coming to America – and those who did not (Gem of the Ocean); and William Gibson recreates the dark, fledgling days of Israel (Golda’s Balcony). Additional works include Are You Ready? by David Auburn, Bad Dates by Theresa Rebeck, The Committee by Brian Dykstra, and many others. show more