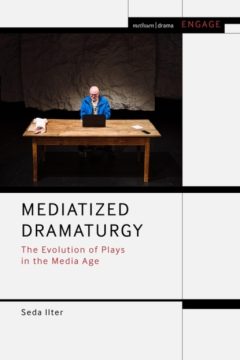 You are viewing: Mediatized Dramaturgy

This study explores the ways in which playtexts have evolved in relation to the sociocultural and cognitive conditions of a mediatized age, and how they, in form and content, respond to this environment and open up new critical possibilities in text and performance. The study combines theatre and media theory through the innovative concept of ‘mediatized dramaturgy’ and offers conceptual reflections on the ways in which a playtext negotiates the new reality of contemporary culture. The book scrutinizes the form of playtexts and works through the exchange between text and performance by exploring contemporary works such as Simon Stephens’s Pornography, Caryl Churchill’s Love and Information, and David Greig’s The Yes/No Plays, and their selected productions. Offering a pioneering intervention that expands discussions about the mediatization of theatre, and new playwriting, Mediatized Dramaturgyproposes areas for discussion that appeal to researchers, audiences and practitioners with an interest in the sub-field of media and performance, and British and North American drama and theatre. Media technologies and their socio-cultural repercussions have increasingly influenced theatre, particularly since the ubiquitous prevalence of digital technologies from the 1990s onwards. Consequently, new modes such as digital and intermedial theatre have come to populate and transform the theatre practice and scholarship. In this changing theatrical landscape, what has happened to plays in the historically text-oriented British theatre? How has playtext changed in an age of theatre marked by mediatization and its possibilities? show more