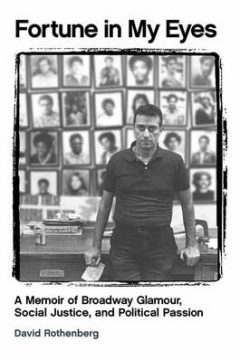 You are viewing: Fortune in My Eyes

Fortune in My Eyes

David Rothenberg’s multilayered life thrust him into Broadway’s brightest lights, prison riots, political campaigns, civil rights sit-ins, and a Central American civil war. In his memoir, Fortune in My Eyes, his journey includes many of the most celebrated names in the theater: Richard Burton, Elizabeth Taylor, Bette Davis, Sir John Gielgud, Peggy Lee, Alvin Ailey, Lauren Bacall, Christine Ebersole, and numerous others. He produced an Off-Broadway prison drama, Fortune and Men’s Eyes, which reshaped his life. John Herbert’s chilling play led directly to the creation of the Fortune Society, which has evolved into one of the nation’s most formidable advocacy and service organizations in criminal justice. Rothenberg was Elizabeth Taylor’s opening night date at the Richard Burton Hamlet – a distant cry from his entering Attica prison during that institution’s famed inmate uprising; these are just two of the experiences revealed in this memoir. As a theater publicist and producer – and as a social activist – he shares experiences with politicians and with anonymous men and women, out of prison, who have fought to reclaim their lives. The human drama of the formerly incarcerated that unfolds in this book is a match for many of the entertainment world’s most fabled characters. show more