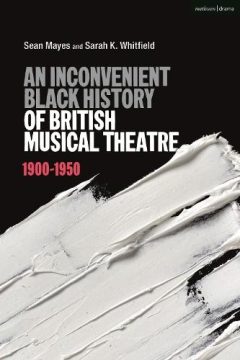 You are viewing: An Inconvenient Black History of British Musical Theatre

A radically urgent intervention, An Inconvenient Black History of British Musical Theatre: 1900 – 1950 uncovers the hidden Black history of this most influential of artforms. Drawing on lost archive material and digitised newspapers from the turn of the century onwards, this exciting story has been re-traced and restored to its rightful place. A vital and significant part of British cultural history between 1900 and 1950, Black performance practice was fundamental to resisting and challenging racism in the UK. Join Mayes (a Broadway- and Toronto-based Music Director) and Whitfield (a musical theatre historian and researcher) as they take readers on a journey through a historically-inconvenient and brilliant reality that has long been overlooked. Get to know the Black theatre community in London’s Roaring 20s, and hear about the secret Florence Mills memorial concert they held in 1928. Acquaint yourself with Buddy Bradley, Black tap and ballet choreographer, who reshaped dance in British musicals – often to be found at Noel Coward’s apartment for late-night rehearsals, such was Bradley’s importance. Meet Jack Johnson, the first African American Heavyweight Boxing Champion, who toured Britain’s theatres during World War 1 and brought the sounds of Chicago to places like war-weary Dundee. Discover the most prolific Black theatre practitioner you’ve never heard of, William Garland, who worked for 40 years across multiple continents and championed Black British performers. Marvel at performers like cabaret star Mabel Mercer, born in Stafford in 1900, who sang and conducted theatre orchestras across the UK, as well as Black Birmingham comedian Eddie Emerson, who was Garland’s partner for decades. Many of their names and works have never been included in histories of the British musical – until now. show more