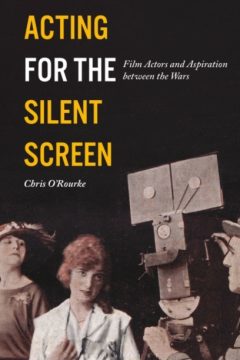 You are viewing: Acting for the Silent Screen

Acting for the Silent Screen

A shop girl wins a newspaper competition and is transformed overnight into a transatlantic celebrity. An aristocrat swaps high society for the film studio when she ‘consents’ to perform in a series of films, thus legitimising acting for what some might have considered a ‘low’ art. Stories like these were the stuff of newspaper headlines in 1920s and reflected a ‘craze’ for the cinema. They also demonstrated radical changes in attitudes and values within society in the wake of World War I. Chris O’Rourke investigates the myths and material practices that grew up around film actors during the silent era. The book sheds light on issues such as the social and cultural reception of cinema, the participatory film culture expressed through fan magazines, instructional booklets and movie star competitions, and the working conditions encountered by actors behind-the-scenes of silent films. Drawing on extensive research and a wealth of archival materials, O’Rourke examines how dreams of stardom were fuelled and exploited in the interwar period, and reconstructs the personal narratives and experiences of the first generation to imagine making a living on screen.In doing so, he reveals a missing – and much sought after – piece of cinematic history to bring to life the developing industries, social attitudes and norms of a period of enormous change. show more