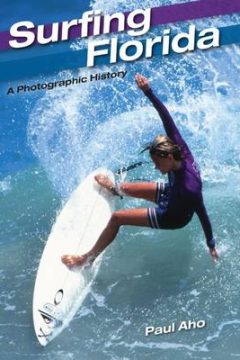 You are viewing: Surfing Florida

is a visual history of how the Sunshine State carved out a place for itself on the map of surfing meccas. A historical surf safari around the coast of Florida. –Bill Whiddon, founding member, Miami Surf Archive Project A compendium of Florida surf stoke! –Steve Pezman, cofounder, The Surfer’s Journal This book is done right. It shows what Florida surfing is all about, from the first surfers in the Sunshine State to the people making waves today. –Tom Dugan, publisher, Eastern Surf Magazine An impressively detailed pictorial and written history of Florida’s surfing and surf culture. –Cecil Lear, cofounder, Eastern Surfing Association Never before has someone compiled such an extensive resource on Florida’s rich and colorful surfing heritage. Incredible photographs accompany the complete story, from the early legends of surfing to today’s explosive professional industry. A fun, informative look into one of the world’s most interesting sports. –Mitch Kaufmann, director, Northeast Florida District of the Eastern Surfing Association Surfing FloridaThe surf itself may be mostly modest, but the waves from Florida surf culture are felt the world over. Kelly Slater is a record-setting eleven-time champion of the Association of Surfing Professionals. Frieda Zamba was the youngest surfing world champion ever. Lisa Andersen was named one of the 100 Greatest Sportswomen of the Century by Sports Illustrated, led a host of young girls to the sport, and is a global ambassador for the surf brand Roxy. However, long before these successes, a collective surf culture flourished in the many beach towns along the state’s east and west coasts, from the first surfing community at Daytona Beach in the 1930s to the early competitors who had to battle misperceptions about the quality of surf and surfers. Fueled by pop culture and the population boom, surfing exploded in Florida in the 1960s, and today you can find surfers, young and old, catching waves on beaches across the state. Surfer Paul Aho has gathered a vibrant treasure trove of images that capture this sport and its unique lifestyle. The action-packed photos are paired with essays by notable historians and interviews with key historical figures. Together, the inspiring visuals and in-depth text portray the origins of surfing in Florida, its people and personalities, its innovations, and its powerful influence on the sport’s international reach. Travel the entire coastline of the state and celebrate this deep-rooted surf culture. From dawn patrol to sunset beach camps, from bellyboarding to beach movies, and from surf music to the sport’s philosophical connection with environmentalism, this is an authentic journey into the heart of Florida surfing.