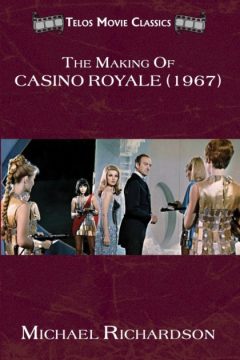 You are viewing: The Making of Casino Royale (1967)

‘My doctor says that I shouldn’t have bullets entering my body at any time!’ The ’60s James Bond spoof Casino Royale is a psychedelic, multi-storylined extravaganza packed with star names, including Peter Sellers, Woody Allen, David Niven, Ursula Andress and Orson Welles. Poorly received at the time of its original release, it has since come to be regarded as a cult classic. In this book, noted television and film researcher Michael Richardson gives the most detailed and comprehensive account ever published of the making of this extraordinary blockbuster, which got so out of control that it became arguably one of the most chaotic productions in cinema history – and certainly the most bizarre James Bond film ever! A series of guides to some of the most talked-about films ever produced. From classics and acclaimed features to lesser-known or overlooked works, but all deserving of critical appraisal. Telos Movie Classics are the perfect way to gain a greater insight into the films you love. show more