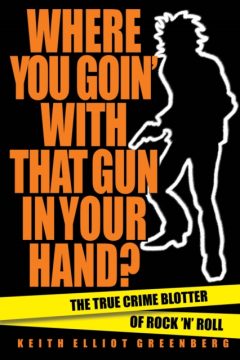 You are viewing: Where You Goin’ with That Gun in Your Hand?

Where You Goin’ with That Gun in Your Hand?

To Alice Cooper, the outlaw quality of rock ‘n’ roll is little more than theater. “Just because I cut the heads off dolls, doesn’t mean I hate babies ” he once said. But others have lived by the criminal philosophy espoused in their work. “The only negative thing about murder is that when you kill someone, they…no longer suffer ” said Norwegian black-metal rocker Varg Vikernes of Mayhem in 1993, the same year he stabbed musical rival Euronymous to death. His tale is prominently featured in Where You Goin’ with That Gun in Your Hand? The True Crime Blotter of Rock ‘n’ Roll. The book examines a total of 21 fatal crimes tied to the music industry, such as the murders of Marvin Gaye, Biggie Smalls, Tupac Shakur, and Selena. In the case of Vikernes – dubbed the most violent musician in the history of metal – the performer is the perpetrator. In other instances – the deaths of John Lennon or Run DMC’s Jam Master Jay, for example – the star is the victim. Other chapters deal with conspiracy theories involving musicians whose lives ended prematurely (e.g., the Rolling Stones’ Brian Jones, the Doors’ Jim Morrison, and Nirvana’s Kurt Cobain). Each story is written as a compelling narrative, in a style the author perfected while writing several true-crime books, as well as December 8, 1980: The Day John Lennon Died and Too Fast to Live, Too Young to Die: James Dean’s Final Hours. show more