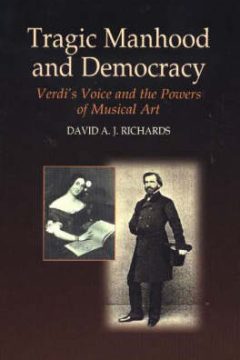 You are viewing: Tragic Manhood and Democracy

What is tragedy? This work argues that it is, at once, art and science — an absorbing art and precisely observed empirical inquiry into human psychology, whose subject matter is the dilemma of manhood under democracy. The author expands discussion of the idea of the tragic to include music drama in general and the operas of Verdi in particular, and explores the indispensable contribution of tragedy to an understanding of personal and political psychology through discussion of: the political theory of structural injustice resting on the suppression of voice (underlying evils like racism, sexism, and homophobia), a developmental psychology of gender (drawing on the work of Carol Gilligan — the Harvard Project on Women’s Psychology, Boy’s Development and the Culture of Manhood), and an interpretation of tragic art (including the expressive role of music in it). Exploration of the tragic impact of patriarchy on democratic voice is at the heart of the power and appeal of Verdi’s innovations in musical voice. At its core is a complex psychic geography of patriarchal practices imposed on personal and political relationships (parents to children, siblings to one another, and adult men and women). Such practices — fundamental to the family, politics, and religion — enforce demands by forms of physical and psychological violence directed by men and women at anyone who deviates from its demands. Verdi’s tragic musical drama speaks of an emotional loss that literally cannot under patriarchy be spoken, namely, what the author calls the tragedy of patriarchy — a divided psychology that lives in the tension between patriarchal practices and democratic principles, and between the psychological demands of patriarchy and democratic manhood.show more