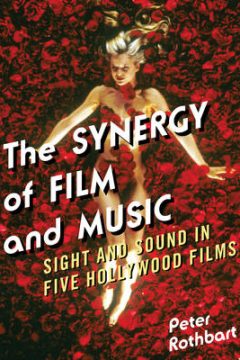 You are viewing: The Synergy of Film and Music

The Synergy of Film and Music

Although writers on film music frequently allude to specific parts of scores, comprehensive examinations of entire scores are rare. In addition, most analyses of scores composed for the screen are discussed outside their cinematic context. To best understand the role music plays in the production of a motion picture, however, it benefits the viewer to consider all of the elements that comprise the film experience. In The Synergy of Film and Music: Sight and Sound in Five Hollywood Films, Peter Rothbart considers the aural and visual aspects of five representative films: West Side Story, Psycho, Empire of the Sun, Altered States, and American Beauty. For each film, the author demonstrates how a variety of elements work together to create a singular experience. After reviewing the various roles that music can serve in a film, as well as providing an overview of the film scoring process, Rothbart looks at each film, examining them one musical cue at a time, so the reader can watch the film while reading about each cue. In these analyses, timecode markings from commercial DVDs are provided in the margins alongside the text, which allow the reader to correlate the on-screen drama to the second. Rothbart explains how music is used in a specific cue and why the decision was made to use that particular musical idea at that moment. Consequently, film music aficionados-as well as students and composers of film music-can gain real-world perspective of how music is used in conjunction with other elements. In this way, the author raises awareness of music’s relationship to virtually every other aspect of cinema-dialogue, sound effects, costuming, set design, and cinematography-to deepen the viewer’s experience. Written in a deliberately nontechnical way, this book is intended for anyone interested in film to easily follow along. At the same time, the information can benefit professional filmmakers or composers because they can see with great detail how each cue unfolds along with all of the visual elements of the film. This unique analysis makes The Synergy of Film and Music a fascinating and instructive volume that both casual viewers and students of cinema will appreciate. show more