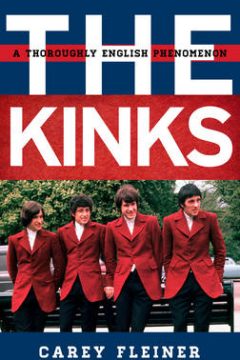 You are viewing: The Kinks

Emerging from the same British music boom that birthed the Beatles and the Rolling Stones, Dave and Ray Davies’s band, the Kinks, became one of England’s most influential groups. Remembered best for such singles as “You Really Got Me,” “Lola,” and “Sunny Afternoon,” the Kinks produced 24 studio albums between 1964 and 1996. The Kinks’ prolific and varied catalog have made them both a mirror of and a counterfoil to nearly five decades of British and American culture. The Kinks: A Thoroughly English Phenomenon examines the music and performance of this quintessentially English band and shows how aspects of everyday life such as work, play, buying a house, driving a car, drinking tea, getting drunk, and getting laid, affected and shaped their creative output. Through an investigation of their music, lyrics, and image, Carey Fleiner shows how the Kinks reflected both the ordinary and the absurd, sometimes confronting topics with anger and sometimes with self-deprecating humor. The Kinks follows the band’s trajectory more or less chronologically and explores themes such as growing up in post-war Britain, the packaging and exploitation of the “British Invasion” bands, satire and self-consciousness, sexuality and gender-bending, social and political pessimism, the comforts of family, and the effects of fame and fandom. Fleiner’s investigation into the influences on and impact of the Kinks’ music takes readers on an engaging adventure through the musical culture of the ’60s, ’70s, and ’80s, revealing how the Kinks created an undeniable sound and image that still attracts new followers today. show more