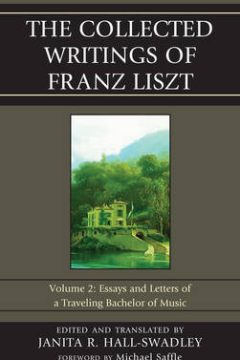 You are viewing: The Collected Writings of Franz Liszt

The Collected Writings of Franz Liszt

During his early years, Franz Liszt worked as a traveling piano virtuoso, his adventures highlighted by his entree into the literary world as a correspondent for the most popular French journals of his time. In this second volume of Janita Hall-Swadley’s The Collected Writings of Franz Liszt, Liszt’s work as a music essayist and journalist is on full display. In his essays, readers will see the influence of the revolutionary theories of Hugues-Felicite Robert de Lamennais, Victor Hugo, and Francois-Rene de Chateaubriand as Liszt boldly calls for social reforms on behalf of musicians and musical institutions, from demands for a repertoire of church music of divine praise to the timely publication of inexpensive music editions. In addition to Liszt’s scandalous review of Sigismond Thalberg and the fiery exchange that ensued, the essays include his testimonies to living composers Giacomo Meyerbeer and Robert Schumann and the recently deceased Niccolo Paganini. Alongside the essay, this new translation of Liszt’s letters opens a window onto the composer’s immersion in the Italian countryside, where he paints a portrait of a rich musical landscape. Liszt regales his correspondents with amusing anecdotes at Sand’s Italian country estate in Nohant, describes the beautiful landscape and artistic treasures of Italy from his residence on Lake Como, defends himself from Heinrich Heine’s accusations of his “ill-seated” character, discusses the religious aesthetic of Raphael’s painting, and offers his thoughts on the interconnectedness of all the arts. Including two complete facsimile reproductions of the existing manuscripts for “De la situation des artistes” and “Sur Paganini a propos de sa mort,” Essays and Letters of a Traveling Bachelor of Music is a must-read for student and scholars of 19th-century classical music. show more