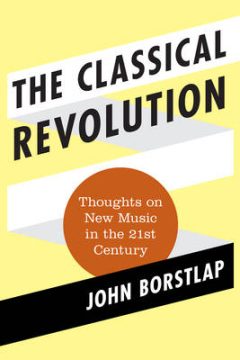 You are viewing: The Classical Revolution

The Classical Revolution studies the recent emergence of a new brand of classical music, one rooted in “pre-modern” tonal traditions. Through polemical essays on the conflict between re-emergent tradition and the usual, bland “modern music” in which academic atonalism, process music and attempts to borrow some life from pop and world music form a rather isolated territory, Borstlap examines both the philosophical and aesthetic positions of these new classical composers, positions too often misunderstood because they create a new and unexpected category, not in the margins of music life but directly related to the central performance culture. As Borstlap points out, part of the ongoing problem of contemporary music, a problem first created by modernism, is a profound misunderstanding of musical modernism itself. At the heart of his argument is the distinction between music and “sonic art” a distinction that renders superfluous the loaded labels of “progressive” and “conservative” in disputes over music. Addressing questions of cultural identity, musical meaning, and the aesthetics of beauty, The Classical Revolution closely examines the institutional biases of the modern-music establishment and its all-too-solid grip on the production and reception of new music. By drawing attention to new classical composers in a traditionalist mold, Borstlap illustrates how their increasing success in the realm of performance-as opposed to academic study-bespeaks a broader set of trends in serious contemporary composition. The Classical Revolution is an accessible and informative polemic for music lovers with an interest in the meaning of classical music in general, and the classical tradition in particular which seems to be re-emerging in the 21st century. It should equally interest academics, music directors, promoters, programmers, musicians, and music students alike since here, a wide field of new musical experience opens itself up, with a hopeful perspective on the future of music. show more