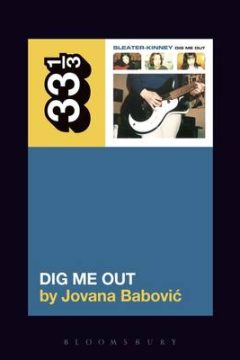 You are viewing: Sleater-Kinney’s Dig Me Out

Sleater-Kinney’s Dig Me Out

Sleater-Kinney’s 1997 album Dig Me Out is built on Corin Tucker and Carrie Brownstein’s competing guitars, Janet Weiss’s muscular rhythms, and layered vocals that teeter between an urgent, banshee-like vibrato and a lower accompaniment. Dig Me Out was the band’s third studio album, but the first one written and recoded with Weiss. It inaugurated Sleater-Kinney into a lineup that would span its two-decade career. This 33 1/3 follows the narrative of Dig Me Out from its inception in Olympia to its recording in Seattle and its reception across the United States. It’s anchored in a short period of time – roughly from mid-1996 to mid-1998 – but it encompasses a series of battles over meaning that continued to preoccupy Sleater-Kinney in the coming decades. The band wrestled with the media about how they would be presented to the public, it contended with technicians about how their sound would be heard in clubs, and they struggled with pervasive social hierarchies about how their work would be understood in popular culture. The only instance where the band didn’t have to put up much of a fight was when it came to their fans. The acclaim Sleater-Kinney received from their listeners in the late 1990s, and continue to receive today, speaks to a need for icons who challenged normative notions of culture and gender. This story of Dig Me Out chronicles how Sleater-Kinney won the fight to define themselves on their own terms – as women and as musicians – and, in the process, how they redefined the parameters of rock.show more