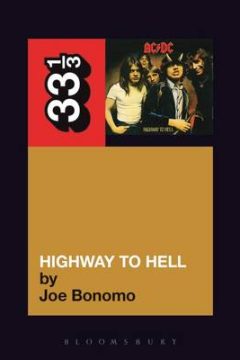 You are viewing: AC DC’s Highway To Hell

This is a brilliant study of the creation, impact, and legacy of one of rock’s great albums, and a hymn to the nature of teenage fandom. Released in 1979, AC/DC’s “Highway To Hell” was the infamous last album recorded with singer Bon Scott, who died of alcohol poisoning in London in February of 1980. Officially chalked up to “Death by Misadventure,” Scott’s demise has forever secured the album’s reputation as a partying primer and a bible for lethal behavior, branding the album with the fun chaos of alcoholic excess and its flip side, early death. The best songs on “Highway To Hell” achieve Sonic Platonism, translating rock & roll’s transcendent ideals in stomping, dual-guitar and eighth-note bass riffing, a Paleolithic drum bed, and insanely, recklessly odd but fun vocals. Joe Bonomo strikes a three – chord essay on the power of adolescence, the durability of rock & roll fandom, and the transformative properties of memory. Why does “Highway To Hell” matter to anyone beyond non-ironic teenagers? Blending interviews, analysis, and memoir with a fan’s perspective, “Highway To Hell” dramatizes and celebrates a timeless album that one critic said makes ‘disaster sound like the best fun in the world.’ ‘A growing Alexandria of rock criticism’ – “Los Angeles Times”, 2008. ‘Ideal for the rock geek who thinks liner notes just aren’t enough – “Rolling Stone”. ‘A brilliant series…each one a word of real love’ – “NME”(UK). show more