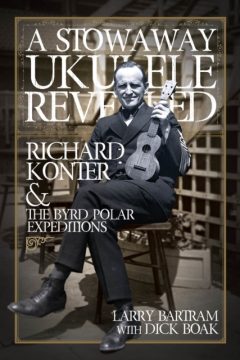 You are viewing: A Stowaway Ukulele Revealed

At the height of the ukulele craze, Konter was a go-to arranger for Tin Pan Alley composers and publishers. In 1926, Konter shipped out as a member of the crew of the Byrd Arctic Expedition. As a riveted world followed their progress (and that of their arch-rival, Roald Amundsen, the world’s greatest polar explorer), Konter managed to get his ukulele aboard Byrd’s plane for the first successful polar flight. A keen contributor to history in the making, Konter managed to obtain the autographs of more than 150 individuals, both famous and unknown, all of whom respected the importance of Konter’s North Pole ukulele. Later, Konter accompanied Byrd to Antarctica and later married, for the first time at age 80, the love of his life. For the first time, A Stowaway Ukulele Revealed: Richard Konter and the Byrd Polar Expedition details the marvellously diverse cast of characters who autographed this little instrument, presenting mini-biographies and photographs to illustrate the interconnected web of lives brought together by Konter. New archival research, interviews, and imaging all combine to make A Stowaway Ukulele Revealed: Richard Konter and the Byrd Polar Expedition a spellbinding read that blends biography, music, polar exploration, history, determination, courage, and romance.show more