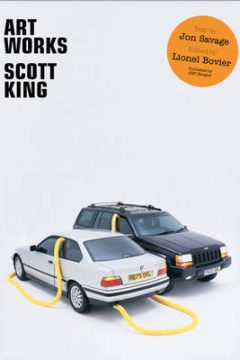 You are viewing: Scott King

Scott King moves fluidly back and forth between art and design. As Art Director of i-D and Creative Director of Sleazenation magazines (for which he was awarded Best Cover and Best Designed Feature of the Year prizes), King’s design work is already well-known around the world. As an artist, King plays fast and loose with twentieth-century icons: in Brian, for example, a viewer recognizes at a glance Lenin’s familiar visage, with the face turned sternly to the side, the moustache plumping his marblesque upper lip, but the face on this white bust bears eye makeup and a hint of blush, and feathers sprout from the neck on either side. (Lenin as Brian Eno in his early Roxy Music days, King explains.) Often, King’s art seems virtually indistinguishable from his design work, as in his maps whose cheerfully colored Marimekko-ish dots represent domestic murders. This monograph is dedicated to the many hats of Scott King, whose work has been exhibited widely in London, New York and European galleries including KW Berlin, Portikus, White Columns, Kunstverein Munich and The Museum of Modern Art, New York. show more