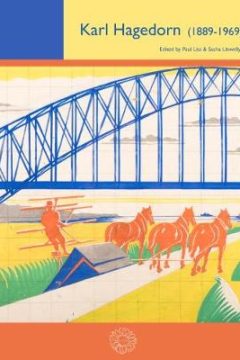 Originating from Berlin Hagedorn moved to Manchester in 1905 to train in textile production. Having studied art under Adolphe Valette at the local Manchester School ofArt and then The Slade School of Art, his training was completed by a period in1912-13 where, working under Maurice Denis, he absorbed a range of avant-garde styles. On his return to England, he made a consciously pioneering attempt to introduce Modernism into Manchester through his work as both painter and designer, exhibiting at the Manchester Society of Modern Painters, RA, RBA, RSMA and with the NEAC.. He became a British subject in 1914 and served as a Lance-Corporal in the Middlesex Regiment during World War I. In 1925 he received the Grand Prix at the International Exhibition of Decorative Art, Paris and in 1935 he was elected RBA. He exhibited at a number of leading galleries in London and the provinces, and was elected to the Royal Society of British Artists, the Royal Institute of Painters in Water Colours, the Royal Society of Marine Artists, the New English Art Club and the NS. Hagedorn has only been the subject of one exhibition and publication: `Manchester’s First Modernist’, a catalogue produced by the Chris Beetles Gallery on the occasion of the retrospective organised in conjunction with the Whitworth Art Gallery, Manchester.show more