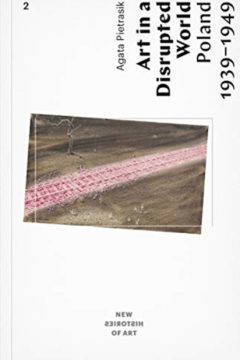 With Art in a Disrupted World, art historian Agata Pietrasik presents a study of artistic practices that emerged in Poland during and after World War II. Pietrasik highlights examples of artworks by a number of Polish-born artists that were created in concentration camps and ghettos, in exile, and during the years of social, political, and cultural disintegration immediately following the war. She draws attention to the ethics of artistic practice as a method of fighting to preserve one’s own humanity amid even the most dehumanizing circumstances. Breaking out of entrenched historical timelines and traditional forms of narration, this book brings together drawings, paintings, architectural designs, and exhibitions, as well as literary and theatrical works created in this time period, to tell the story of Polish life in wartime. Employing an accessible, essayistic style, Pietrasik offers a new look at life in the ten years following the outbreak of World War II and features artists-including Marian Bogusz, Jadwiga Simon-Pietkiewicz, and Jozef Szajna-whose work has not yet found substantial audiences in the English-speaking world. Her reading of the art and artists of this period strives to capture their autonomous artistic language and poses critical questions about the ability of traditional art history writing to properly accommodate artworks created in direct response to traumatic experiences. show more