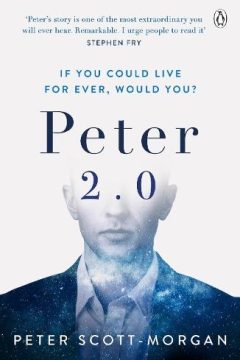 The incredible and inspiring book behind the primetime Channel 4 documentary, Peter: The Human Cyborg ‘Peter’s story is one of the most extraordinary you will ever hear. Remarkable. I urge people to read it’ Stephen Fry ‘With candour and bravery, Peter tells how he explored new frontiers of science to give himself a chance of survival in a digital afterlife’ Daily Mail __________ Peter didn’t choose to live forever. He simply chose not to die. Diagnosed with a rare but terminal Motor Neuron Disease, brilliant scientist Peter Scott-Morgan refused to accept that within a few short years he’d be dead. Instead, he embarked on a dangerous journey – to cross the border between mortality and immortality. He would meld his humanity with the latest computer and robotic technology to become Peter 2.0. This is the astonishing story of a man uniquely placed to pursue a new way of life that would not only alter him but perhaps redefine what it means to be human forever. __________ ‘A remarkable story . . . you’re left desperate to take nothing for granted’ Radio Times ‘What’s striking is Peter’s constant optimism, bravery and his ability to find radical answers to problems that have confounded Britain’s brightest minds’ Daily Telegraph ‘Intriguing’ The Times ‘Fascinating and extremely moving’ Sun ‘A remarkable account of what it means to be human and what technology can really achieve’ Sunday Telegraph show more