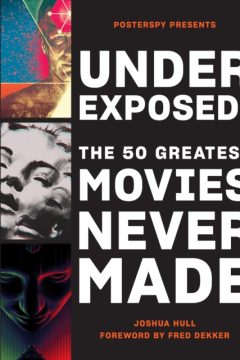 You are viewing: Underexposed!

A collection of 50 original posters celebrating the most compelling unmade films in the history of moviemaking For most films, it’s a long, strange road from concept to screen, and sometimes those roads lead to dead ends. In Underexposed!: The 50 Greatest Movies Never Made, 50 artists from around the globe each contribute imagined poster art for one such dead-end film-a movie that never made it into production or that changed drastically from initial concept to final film. Each poster is accompanied by a short essay that explains the history behind a never-made film, detailing the speed bumps and roadblocks during development and preproduction that, for better or worse, kept the filmmaker’s original vision from ever reaching the silver screen. Featuring artwork from some of PosterSpy’s most beloved artists, including Liza Shumskaya, Scott Saslow, Matt Talbot, Sam Coyle, and many, many more, Underexposed! is sure to spark the cineaste’s imagination with tantalizing visions of the greatest movies never made. show more