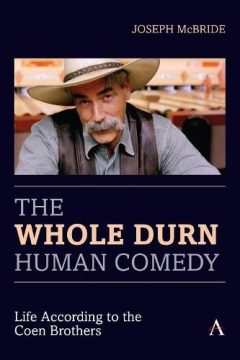 You are viewing: The Whole Durn Human Comedy: Life According to the Coen Brothers

The Whole Durn Human Comedy: Life According to the Coen Brothers

The Coen Bros. have attracted a wide following and have been rewarded with Oscars and other honors. Some of their films such as Fargo, The Big Lebowski, and No Country for Old Men are cult favorites and box office hits. Yet this team of filmmaking brothers remains misunderstood in some critical circles, partly because, like John Ford, they mischievously refuse to explain themselves to interviewers, preferring to let their work speak for itself. Ethan and Joel Coen also delight in unsettling cinematic conventions and confounding audiences while raising disturbing questions about human nature. Mixing film genres and styles, playing with narrative in postmodernist ways, the Coens’ films display shocking tonal shifts as they blend comedy and drama and, most controversially, comedy and violence. This potent mÃ©lange of themes and stylistic approaches makes the Coens’ films adventurous, unpredictable probes into social anxieties and reflections on the omnipresence of evil in the modern world. In their trenchant satire, these brilliant writer-directors are heirs to Preston Sturges and Billy Wilder, and as satirists tend to do, the Coens sometimes provoke audience anger and incomprehension along with enjoyment of their penchant for black comedy. Film historian and critic Joseph McBride jousts with the Coens’ detractors while defining the filmmakers’ freshness and originality. The quirkily individualistic Coens are the kind of personal filmmakers the increasingly conglomerated American cinema rarely fosters anymore, a distinction partly attributable to their following in Europe and their partial financing by European sources. This critical study goes beyond the often-superficial and confused nature of Coen criticism to illuminate their artistic personalities and contributions to cinematic culture. show more