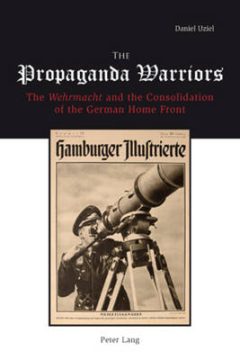 You are viewing: The Propaganda Warriors; The Wehrmacht and the Consolidation of the German Home Front

The Propaganda Warriors; The Wehrmacht and the Consolidation of the German Home Front

It has been generally assumed that the driving force behind German propaganda in World War Two was the Propaganda Ministry headed by Josef Goebbels, or the initiatives of various Nazi party organizations. There has been little research on the specific role of the Wehrmacht propaganda machine in this connection, even though it was the source for the bulk of German wartime propaganda material. This book deals with the history of the propaganda troops of the Wehrmacht, created shortly before WWII as a result of lessons learned concerning the importance of psychological warfare during WWI. This unique branch of service proved to be indispensable to the German propaganda effort during WWII. The products of its Propaganda Companies – better known as “PK”, a term that became synonymous with high-quality war reporting in Germany – formed a crucial and popular part of wartime propaganda. The military propaganda organization worked closely with Goebbels’s Propaganda Ministry and their cooperation contributed to the success of this young service. The veterans of the propaganda troops and their wartime and postwar products continued to influence the image of the Wehrmacht and WWII long after the war. show more