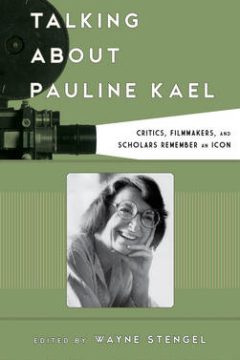 You are viewing: Talking about Pauline Kael

For nearly 25 years, Pauline Kael was one of America’s most respected, controversial, and talked-about film reviewers. A contributor to the New Yorker from 1968 until 1991, Kael’s reviews were collected in several volumes, including I Lost It at the Movies, Kiss Kiss Bang, Bang Bang, and 5001 Nights at the Movies, as well as a volume for the Library of America series. Although Kael was the subject of an acclaimed biography by Brian Kellow, her writings have never been systematically discussed or analyzed. In Talking about Pauline Kael: Critics, Filmmakers, and Scholars Remember an Icon, Wayne Stengel has assembled a collection of essays that acknowledge this singular critic and her work. In addition to tributes and remembrances by Roy Blount, Jr., filmmakers Joan Tewskbury and Paul Schrader, fellow film critics David Denby and Martin Knelman, and other colleagues and friends, this anthology also features critical pieces that investigate the range, scope, and influence of Kael and her writings. While Kael’s film criticism is readily available in several volumes published since the 1960s, this collection of commentary offers unique insights from those who knew her or were influenced by her. As such, Talking about Pauline Kael will be of interest to scholars of cinema in general, but also to anyone wanting to know more about the lasting impact of Kael, not only on film criticism but on film and filmmakers. show more