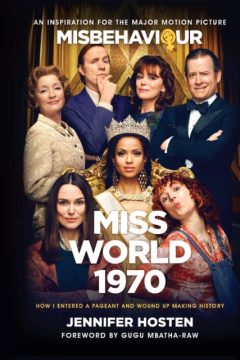 Misbehaviour, a major motion picture based on the author’s life, and starring Keira Knightley and Gugu Mbatha-Raw (as Jennifer Hosten), will be released globally in 2020. 1970 was the last year of the Beatles and the first year of the supersonic Concorde–a time of new possibilities and social upheaval, and Jennifer Hosten, a young airline hostess from the Caribbean island of Grenada, was as surprised as anyone to find herself in the midst of it. After winning a Miss Grenada contest, she travelled to London for the 1970 Miss World pageant and arrived at Royal Albert Hall determined to make her mark. So, too, did members of the fledgling Women’s Liberation movement. They chose that globally-televised moment to protest the exploitation of women. They planted bombs, stormed the hall, and chased comedian Bob Hope from the stage. By the end of the night, the world had been introduced to both radical feminism and a new ideal of feminine beauty. Ms. Hosten was the first woman of color crowned Miss World. Miss World 1970 is the story of the craziest and most meaningful pageant ever, an inspiring account of Ms. Hosten’s barrier-breaking win and her subsequent globe-trotting career as a development worker and diplomat. show more