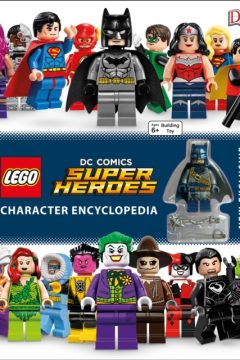 This awesome LEGO book features all your favorite LEGO DC Comics(TM) Super Heroes minifigures, including LEGO Batman, LEGO Superman and all their friends and foes. Plus the book comes with an exclusive LEGO Batman minifigure! Be wowed by incredible facts and figures about all the characters from the LEGO DC Comics Super Heroes universe including Green Lantern, The Joker, Penguin, Poison Ivy, Bane, The Flash, Wonder Woman and more. Did you know that Harley Quinn’s Hammer Truck has whack-a-bat scrawled on it? Or that the Batboat can float, drive on land and fly? Discover all the incredible details in the LEGO DC Super Heroes Character Encyclopedia sets, as well as the minifigures’ special weapons, cool gadgets and amazing vehicles. LEGO, the LEGO logo, the Brick and Knob configuration and the Minifigure are trademarks of the LEGO Group. (c) 2016 The LEGO Group. Produced by Dorling Kindersley under licence from the LEGO Group. Copyright (c) 2016 DC Comics. All related characters and elements are trademarks of and (c) DC Comics. (s16) show more