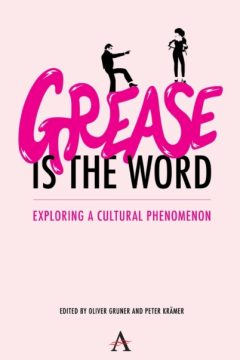 You are viewing: ‘Grease Is the Word’

‘Grease Is the Word’

With its catalogue of hit songs, iconic characters, memorable quotes and familiar scenes, ‘Grease’ is truly a behemoth of US and global popular culture. From the stage show’s debut in 1971, to the Hollywood film of 1978, to the numerous rereleases and anniversary celebrations of the twenty-first century, it has enjoyed, and continues to enjoy, success across a range of media. ‘Grease”s extended run on Broadway through the 1970s ensured it a prominent place within broader debates on the musical, 1950s nostalgia and American youth. Numerous stage revivals have followed, with theatres across the world revisiting Rydell High in front of sell-out audiences. Hollywood has time and again sought to recreate ‘Grease’ the movie’s phenomenal box-office success with a procession of similarly themed rock and roll youth musicals (‘Footloose’, ‘Dirty Dancing’, the ‘High School Musical’ franchise, to name a few). However, even as these productions enjoy their own renown, in terms of sheer longevity, prominence and popularity, ‘Grease’ was, is and will remain ‘the word’ when it comes to musical blockbusters. Bringing together a group of international scholars from diverse academic backgrounds, ‘Grease Is the Word’ provides a series of fresh and detailed analyses of the cultural phenomenon ‘Grease’. From the stage show’s first appearance in 1971 to twenty-first century responses to the ‘Grease Megamix’, ‘Grease Is the Word’ reflects on the musical’s impact and enduring legacy. With essays covering everything from production history, political representations, industrial impact, music, stars and reception, the book shines a spotlight on one of Broadway’s and Hollywood’s biggest commercial successes. By adopting a range of perspectives, and drawing on various visual, textual and archival sources, the contributors maintain a vibrant dialogue throughout, offering a timely reappraisal of a musical that continues to resonate with fans and commentators the world over. Written in an engaging, accessible manner, the book will appeal to students, academics, and anyone interested in American popular culture. show more