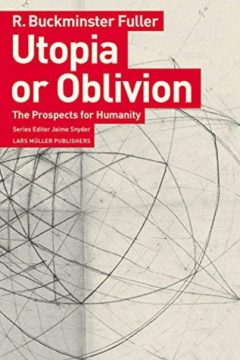 You are viewing: Utopia or Oblivion: The Prospects for Humanity

Utopia or Oblivion: The Prospects for Humanity

A classic of utopian literature, more urgent than ever: Buckminster Fuller’s provocative blueprint for the future Composed of lectures given by Buckminster Fuller throughout the world in the 1960s, Utopia or Oblivion presents the thesis that humanity, for the first time in its history, has the opportunity to create a world where the needs of 100% of humanity are met. Fuller’s grandson, in the introduction, refers to this selection as “hardcore Bucky,” as these essays display Fuller’s investigations into mathematics, geometry and how they intersect with the arts, music and world peace. In Fuller’s words, “This is what man tends to call utopia. It’s a fairly small word, but inadequate to describe the extraordinary new freedom of man in a new relationship to universe–the alternative of which is oblivion. First published in 1969 and then reprinted by Lars MÃ¼ller in 2008, Utopia or Oblivion also includes one of the earliest published discussions of Fuller’s World Game, a revolutionary “game” that set as the goal for players, that the world “works” for 100% of humanity to nobody’s disadvantage. It challenged players to overlook traditional world units such as nations, states and other political and economic divisions. show more