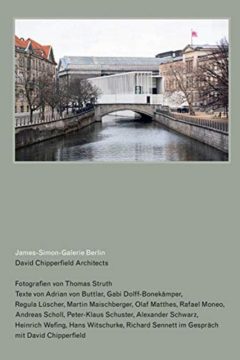 A tribute to the final building in Berlin’s “Museum Island,” designed by David Chipperfield and photographed by Thomas Struth British architect David Chipperfield’s (born 1953) James Simon Gallery, the new entrance building between the Kupfergraben and the Neues Museum, marks the architectural conclusion of the Museum Island ensemble in Berlin, 180 years since the first building was erected. It forms, together with the Archaeological Promenade, the centerpiece of the master plan developed in 1999, which has since served as the starting point for all further planning on Berlin’s Museum Island. This book, published on the occasion of the opening, documents the building and its cultural context. Photographs by Thomas Struth present the completed building both within its urban context as well as in intimate close-ups. In addition, this generous volume contains site plans, floor plans, preliminary drawings and images of architectural influences and contexts. Texts by prominent architects, historians and sociologists complement the artistic photographic documentation.show more