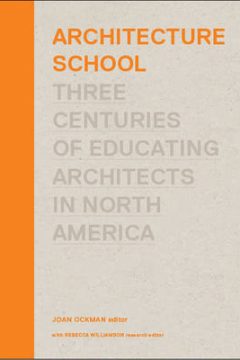 You are viewing: Architecture School

The first comprehensive history of architecture education in North America, offering a chronological overview and a topical lexicon. Rooted in the British apprenticeship system, the French Beaux-Arts, and the German polytechnical schools, architecture education in North America has had a unique history spanning almost three hundred years. Although architects in the United States and Canada began to identify themselves as professionals by the late eighteenth century, it was not until nearly a century later that North American universities began to offer formal architectural training; the first program was established at MIT in 1865. Today most architects receive their training within an academic setting that draws on the humanities, fine arts, applied science, and public service for its philosophy and methodology. This book, published in conjunction with the centennial of the Association of Collegiate Schools of Architecture (ACSA), provides the first comprehensive history of North American architecture education. Architecture School opens with six chronological essays, each devoted to a major period of development: before 1860; 1860-1920; 1920-1940; 1940-1968; 1968-1990; and 1990 to the present. This overview is followed by a “lexicon” containing shorter articles on more than two dozen topics that have figured centrally in archictecture education’s history, from competitions and design pedagogy to research, structures, studio culture, and travel. show more